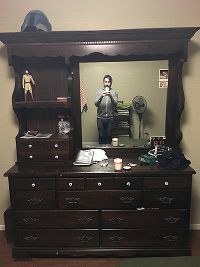 At this point, I don’t know what to do with it.

It’s a piece of bedroom furniture. It’s old, it’s wooden, and it looks like grandparent furniture. The reason I probably think as much is because it was just that. And by the time I first recognized the behemoth of a combined mirror and chest of drawers that takes up one wall, I was a young child and my grandfather and grandmother were living together but enjoying the solitude of their own bedrooms.

There it was: the monstrosity currently in my bedroom, purchased somewhere in upstate New York in the early 1980s and ultimately handed down to me. I don’t recall having a certain affinity for the piece of furniture as a child — I just remember it being a part of my grandfather’s bedroom. Eventually, it made the move from upstate New York into a central New Jersey retirement community, where it remained with him until his death in 1986. I think my father decided to leave it as it was with my grandmother as a reminder to his presence. Either that, or it was just too huge to move at the time for a father with three boys.

Following the death of my grandmother in 1988, everything didn’t exactly get sold off. The Cadillac went to my father, as well as the bedroom furniture, and it became my mother’s main piece of bedroom furniture for a few years in the late 1980s. Then, another move, another birthday for me, and the monstrosity that had first been my grandfather’s went from my parents to myself at age 16. I was a meticulous duster at the time, and this thing generated copious amounts. It also housed my BMX trophies, and my cassette collection. Jesus and Mary Chain, Descendents, Minor Threat, all adding another then unseen level to the piece of generational furniture. It saw my first struggle with depression.

Six months later, another move, back into my original childhood bedroom, it remained with me through my final years of high school and stayed behind when I left for college, with most all of my belongings still inside of it: old BMX magazines, more cassette tapes, Red Hot Chili Pepper concert ticket stubs.

For the better part of four years, I only saw my reflection in that mirror on the weekends, and truth be told, I didn’t miss it. It was a relic of a another life that I had left behind. So I kept leaving it behind. I moved and moved and moved again and never thought much about that damn piece of furniture, which stayed with my father inside of our house until he decided to downgrade to a smaller house, where it took up one half of his new spare bedroom. On nights when I stayed over there, I’d glimpse up and spy my reflection in that same mirror that I first glimpsed into as a young child.

Then, in 2009, my father decided to move again, to Florida. I was in Jersey City, NJ by that point after stints all over the damn map, and I think I was using borrowed post-college bedroom furniture from a former roommate for the entire time. But we had a decent sized apartment by that point, not far from Journal Square, and when my father offered up that damn piece of bedroom furniture, I agreed, no questions asked. We had the room, we needed the storage.

The next apartment was half the size, and we struggled to fit it in the bedroom. The bedroom was literally that: a bed, and this behemoth of a family heirloom. And then things got really weird: I decided to move to to Los Angeles, with moving expenses paid by my work. I asked in earnest for my brother to take it, to keep it in the family on the east coast, maybe one day give it to his daughters, but it never happened. Five years ago this week, the movers showed up in Jersey City, took it apart and shipped it to Redondo Beach, California, where it ended up in two bedrooms over three years before ultimately making another move to Austin, Texas.

It’s now been across the country and halfway back, and sitting inside of my bedroom in a third floor walk up surrounded by college students, a long way and time ago from where I first encountered it. I sometimes think that my next random move, I’ll just leave it behind and finally let it flow to another person or family, but then I second guess myself and think that I’ve been looking into the same unbroken mirror for probably 35 years at this point.

Like I said at the start: At this point, I don’t know what to do with it.